‘THE WINDUP GIRL’ BY PAOLO BACIGALUPI

Standard by artdirection June 13, 2022 No Comments 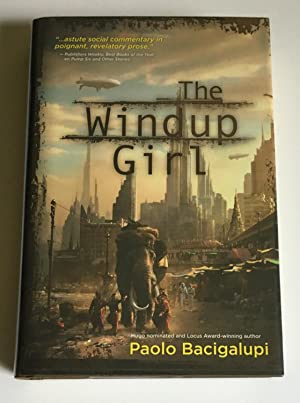 ‘The Windup Girl’ is an award-winning science fiction novel by Paolo Bacigalupi, an American writer. The most impressive thing about the book is that it was his debut novel, published by Night Shade Books in 2009. It covers several modern issues, such as the impact of global warming and biotechnology. In 2010, the novel won the prestigious Hugo Award.

If you are fascinated by the genre ‘Biopunk’ then you must pick up the book. The novel is full of references to experimentation with DNA and ‘gene ripping’. Paolo Bacigalupi’s work is also an excellent example of the way in which such research can go horribly wrong.

Paolo Bacigalupi graduated from Oberlin College with a major in East Asian Studies. After the success of The Windup Girl, he wrote many more science-fiction novels and now, he has a well-known name in this genre.

The book portrays life in ‘post-contraction’ Thailand, where the world’s expansion economy has collapsed. Thus, the regions are more poverty-stricken and inaccessible. The novel sets up a long foundation that explores and analyses life after global warming for two hundred years where sterilised gene ripped cultivation has created a harsh environment.

Now, calories have become the currency, and the world is always only a step ahead of the crop blighting infestation and next mutation of plague. The world that Bacigalupi has created is brutal, ugly, uncontrollable and teamed with exploitation and survival approaches. The central character of the novel is Emiko, a Windup, which means that she has been genetically created to become a new individual.

Readers are likely to find the book interesting because of the issues covered in it. The author has shown the life after global warming, which has emerged as a matter of grave concern for the entire world. So, the novel not only provides excitement to the reader but also shows a hidden concern in terms of where we are heading. If you are inserted to read about science fiction novels by New York Times bestselling author, then read Enders Game by Orson Scott Card.

The most important thing that makes ‘The Windup Girl’ novel so gripping is, it is full of perfectly developed characterisations. Moreover, it also has a group dynamic which makes the book entertaining as well as compelling. The ideas of Paolo Bacigalupi are fresh and thought-provoking. The only slightly negative aspect could be the fact that he takes a long way to get where he is going.

Paolo uses the time of the reader intelligently by setting up the conclusion in such a way that if you reach the end part of the book, you will be rewarded as the end is quite satisfying and bring together well.

If you want to read this book and other books by the author, then you can get the book from any book store near you. You can also order it online and experience the thrill.